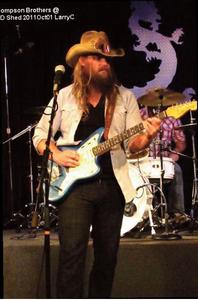 Chris Stapleton, a 1996 JCHS graduate, has spent his
years since graduating paving a prolific career as a singer songwriter.
While in high school, Stapleton was the epitome of a well-rounded
student. Valedictorian of his class, Stapleton also
played football, basketball, baseball, ran track, and was on
the swim team. In addition to his intellect and athleticism, he
always sought a chance to display his musical and dramatic
talents by performing in school plays.

While in college at Vanderbilt, Stapleton began courting a
career in Nashville. His talent as a singer, musician and songwriter
has helped him build a high profile name for himself
as well as the bands he's played in.

Singing and writing for Country, Bluegrass, and Rock
musicians, Stapleton is a Universal Recording Artist, a 3
time Grammy nominee, and an IBMA award winner. He also
has multiple ASCAP and NSAI awards.

Today as a solo artist, Stapleton has had enormous Grammy
and CMA success. Stapleton is the first artist to win Album of
the Year and New Artist of the Year at the same awards. Traveller
became the first album to re-enter the Billboard 200 all-genre album
chart at Number 1 where it stayed for two straight weeks. Stapleton
returned home in 2016 to perform two free concerts for the students of
JCHS and the community where he grew up.