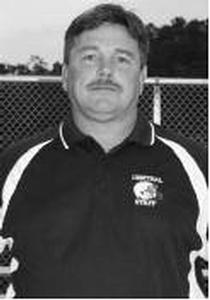 Coach Jim Matney, a Belfry High School and Liberty
University graduate, has had the most successful run
of any coach in JCHS history as he has helmed both the
football and wrestling squads.

In 2004 Matney was named JCHS head coach after a
successful career at Sheldon Clark High School. The
turnaround in the football program was quick, and in
the last 10 seasons, Matney has won an astounding
nine district titles, had four regional runner-up
finishes, two regional championships, and two semi-state
appearances. He has led teams to 3 undefeated
seasons and was named the 2006 State Coach of the
Year. In 2016 his Eagles were state runner-ups.

In 2007 Matney became the JCHS wrestling coach
and has had as much or more success with that
program. His grapplers have won six consecutive
regional championships and were the 2013 State Dual
Runner-up team. He has coached 5 individual
wrestlers to state championship titles (he’s coached 23
individual state champions throughout his career).
No matter how many wins he has accrued, Matney
considers his biggest achievement having 30 football
players and wrestlers sign national letters of intent to
play in college.

Matney continues to coach both football and
wrestling at JCHS. He lives at Hager Hill with his wife
Debby and their two children, Dalton and Carson.